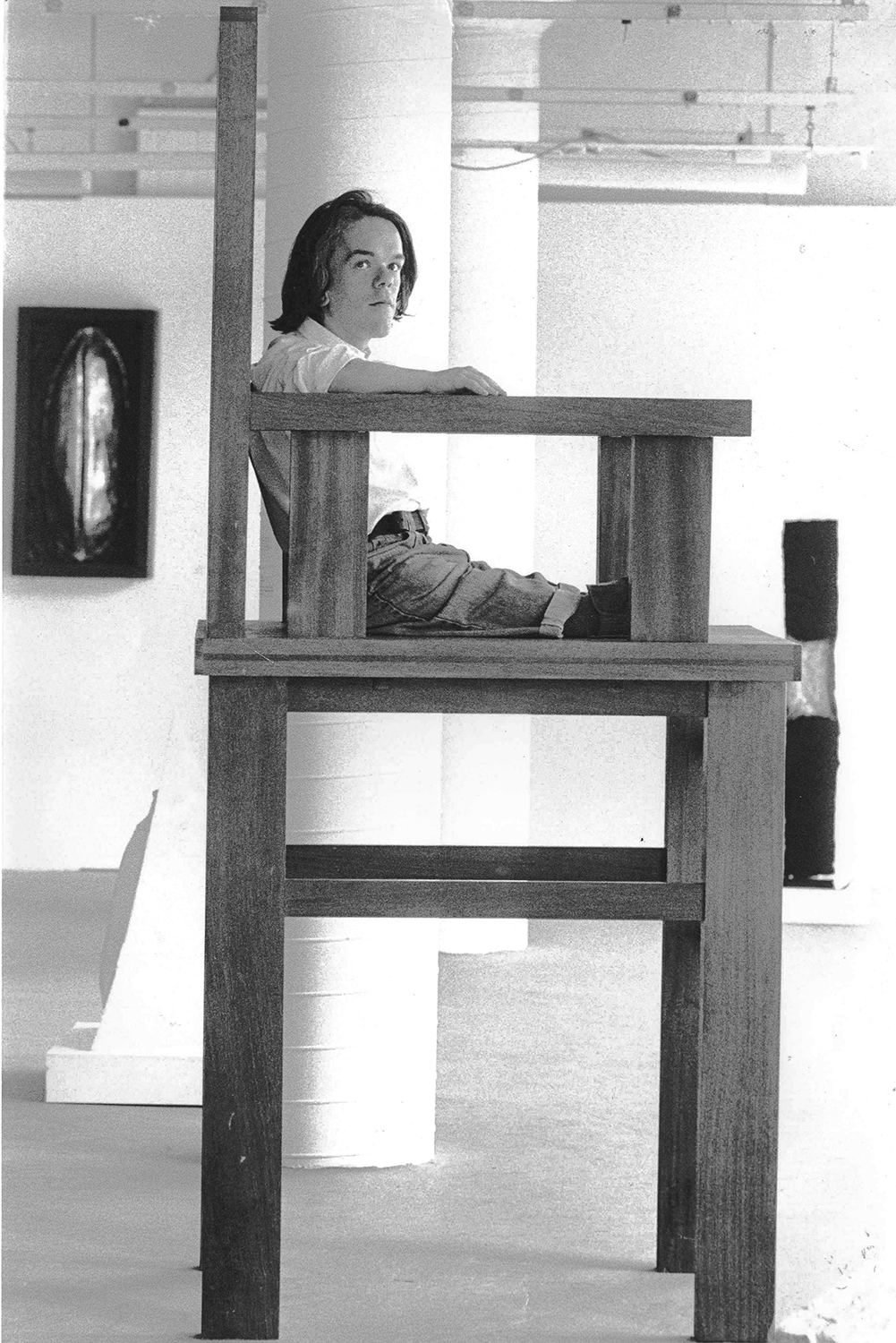 While still a student at NCAD, in 1989, Corban Walker showed Tiny Big Man at Sculpture in Context (qv) in Fernhill Gardens, Dublin. The work, a tiny figure surmounting a tall narrow plinth, addressed the issue of scale, and not without a degree of humour. In the following year, at the NCAD degree show, his Please be Seated (UCD) [312], a gigantic wooden chair, was intended ‘to open people’s eyes’ to the way in which the world is ordered to human scale, on the assumption that the average male height is six feet (IT, 16 June 1990). In his early practice, Walker was exploring overtly the relationship between himself – he is approximately four-feet tall – and the built environment. In his first solo show, Latitude, at City Arts Centre in 1994, which comprised sculpture and drawings, he devoted one room to a site-specific installation of criss-crossing metal wires, positioned in such a way that it was difficult and potentially dangerous to traverse the work. However, Walker did not restrict his challenging visual work to an exploration of height and scale, but, conscious of the wider range of problems encountered by people with disabilities, he explored other relevant topics and participated in Celebrating Difference (City Arts Centre, 1993) with a ‘powerful’ piece on the subject of sex (Circa, 66 (Winter 1993), 56).

Corban Walker was born into the world of art in Dublin. His father, Robin, was one of the named architects in the firm Scott Tallon Walker; his mother, Dorothy, was a well-known art critic. Educated by the Jesuits at Gonzaga College, Walker studied for a degree in sculpture at NCAD, 1987–92. He was confirmed in his decision to become an artist in 1985 during a trip to Paris, where Bulgarian-American artist Christo had recently wrapped the Pont Neuf. Walker, captivated by this colossal undertaking that was in place for only two weeks and yet practically shut down the city (Sun Ind, 9 August 2009), seemed fascinated by the inherent power of art. Having graduated from art college, Walker was briefly distracted by a leading role in Noel Pearson’s film Frankie Starlight, 1994–95. The film was not entirely successful, but a Guardian reviewer singled out Walker, whose ‘wry humour’ was apparently ‘the only interesting thing’ in it (16 May 1996). The acting experience made him more confident about his artistic practice and resulted in his second solo exhibition Sculpture (Green on Red Gallery, 1995), which included minimalist forms using slate, stainless steel, glass (which would become a hallmark material in his work) and silver leaf. Ocular Field (stainless steel and silvered glass, 1995) [313], comprising twelve slender and elegant squared columns, evenly spaced in a single row, incorporated a reflective element. The work could readily pass for a piece of Op Art sculpture, as well as being suggestive of the rhythm and movement of cinematic film.

Ocular Field was made for the Georgian interior that was the Green on Red Gallery space at the time. In the following year Walker adapted the work for a gallery in Poitiers, Le Confort Moderne, as part of L’Imaginaire Irlandais (1996). A year later, yet again at Green on Red, Walker replaced the reflective columns with fluorescent tubes. Maintaining the minimal upright form, Station (N.S.E.W.) echoed the work of American Dan Flavin. For the same show, a series of 357 polaroid photographs, titled Mapping, captured fragments of the environment – doors, walls, floors – to create virtually abstract images. The photos were hung on a wire at four feet high, rather than the standard eye-level, ensuring a certain awkwardness for viewers of average height. Walker pointed out that he was offering ‘an alternative sense of relationship, a frame of perception directed through [his] eyes’ (conversation with Mick Wilson (qv), 1997, n.p.). Walker makes particular demands of his audience, often requiring that they exert themselves to engage with his work: clambering onto a chair; ducking to avoid being decapitated by wire; stooping to view low-slung work. His Standing Structure V (mild steel and glass, 1997), a tall narrow frame holding hundreds of small square glass shards, had a seductively tactile but dangerous quality.

If scale remains a constant concern in Walker’s sculpture, architecture also has a significant role in his practice. His work is architecture-related by way of its form, as well as in its association with its surroundings. He identifies this characteristic in his installation work, which he regards as a shift away from sculpture as ‘self-contained object’ (conversation with Mick Wilson). Several permanent examples of such work are in corporate architectural spaces, some of which were commissioned in conjunction with the Percent for Art Scheme: Limerick County Council headquarters – in the atrium of which is Water Falling (2003), a stacked fountain made from forty steel trays, a Donald Judd-like work rising over several floors; Bank of Scotland, Dublin – the atrium has thirty square staves, which ‘incline outwards with dramatic effect’ and distract from a bare party wall (IT, 31 March 2005); Civic Centre, Ballymun – where Zip, 2005, a light sculpture, occupies a vast corner site of the atrium; Mason Hayes+Curran, a law firm in Barrow Street, Dublin – in the atrium, running from the basement through the ground floor, Walker revisited the slender squared columns of his earlier work in 2006. In the Barrow Street work, Walker has clustered substantially taller columns than were previously used, as if to mimic, in abstract form, a group of high-rise buildings in Manhattan, where he lives. The rhythm of the repeat modules, a recurrent motif in these commissioned works and in his work generally, and their architectonic form, is particularly suited to large impersonal spaces. Walker’s interest in and experience of architecture won him a place on the jury – the only non-architect juror – for the AAI awards in 2003.

Walker has exhibited widely, initially from Dublin and then from his new base in New York. In the first decade of his career he was keen on the intimacy of the Dublin art world and was satisfied to acquire a wider experience of art by travelling to show his work and to see exhibitions abroad. However in 2004 he felt ready to leave Ireland and, rather than London or Europe, he chose New York, where he is in the stable of The Pace Gallery, having first exhibited with them in 2000. He points out that relocating himself enabled him to be more experimental with his work generally and, in particular, to develop his glass sculpture, which has resulted in his spending a lot of time in the Czech Republic (interview with Eamonn Maxwell, Ireland at Venice 2011, p. 24). He has worked at the Pilchuck Glass School, Seattle, 2007, and at the Museum of Glass, Tacoma, Washington, 2008. New glass sculptures, his Grid Stack works, were shown in Green on Red in 2007. These irregular-shaped towers, made of layered sheets of glass, were certainly self-contained objects, though still architecture-related.

In 2009 Walker created Mapping Hugh Lane for his participation in the HL’s Golden Bough series. His large minimal structures, made of rich blue perspex, distorted the familiar space and constrained movement through it – while ‘ensuring that viewing remained an active process’ (John Gayner, ‘Corban Walker: Mapping Hugh Lane’, The Golden Bough, HL, Dublin, 2011, p. 5). In the following year, when the director of The Pace Gallery, Emily-Jane Kirwan, was appointed Irish commissioner for the 54th Venice Biennale, she chose Walker to represent Ireland [see 339]. The circumstances were ideal for a minimalist sculptor who responds to the intended location of his work – in this instance the ground floor of the Istituto Santa Maria della Pietà, a thirteenth-century building in the Castello district of Venice. Walker’s work for the site was both 2 and 3D: vinyl window drawings, Modular and Transparent Wall; and a stainless steel sculpture, Please Adjust [314]. The sculpture, made of 176 interlocking stainless steel bars (4 mm thick), was like ‘a three-dimensional drawing in space’ (Maxwell, p. 16). At once robust and fragile, the work incorporated an element of chance – unusual in Walker’s sculptures. The way in which the cubed-frames interlock and finally settle is, intentionally, beyond the control of the sculptor. Please Adjust had an earlier existence in 2008 as a smaller work, with only three interlocking forms, which, when touched, would collapse into another position. In a work where ‘any small movement would have a much larger effect’, Walker indicated that he was responding to the beginnings of the financial crisis (IT, 28 May 2011). This theme was developed on a more substantial scale in the Venice work, where interconnectedness and uncertainty dominate. Please Adjust was reconstructed for exhibition at the RHA in 2012 with the indication that the work was subject to alteration at each installation, thus questioning the notion of sculpture as a constant and stable form.

In 1998 Walker was commissioned to make a permanent work for the new exhibitions wing at CAG. His ‘uniquely playful and crisply modern’, Stair, 2000, comprising a series of glass plates on the staircase of the building, has been described as ‘one of the most successful applications of the 1% for Art Scheme’ (Circa, 94 (Winter 2000), 42, 43). Stairs and ramps have been a feature of Walker’s work since To… (slate, 1994) at this first solo show. He described the steps in To…, which were ‘scaled horizontally, so [he’d] see where [he’d] go further down the road’, as ‘the departure point’ of the exhibition (City Arts Centre, exhibition hand-out). Stair-related work, and subsequent stacking and layering, all derive from what Walker has often referred to as ‘corbanscale’, which is based on the numerical digit 4 and derives from his height. If, as Brian O’Doherty (qv) has said, ‘Walker walks the world at a different scale’ (Ireland at Venice 2011, p. 9), he has turned this unique view to aesthetic advantage in accomplished sculptural works that employ minimalist precision, taut execution and cool materials.

Corban Walker was elected to Aosdána in 2011. His work is in many public and private collections in Ireland, including the Arts Council, IMMA, Dublin City Council, UCD and CAG.