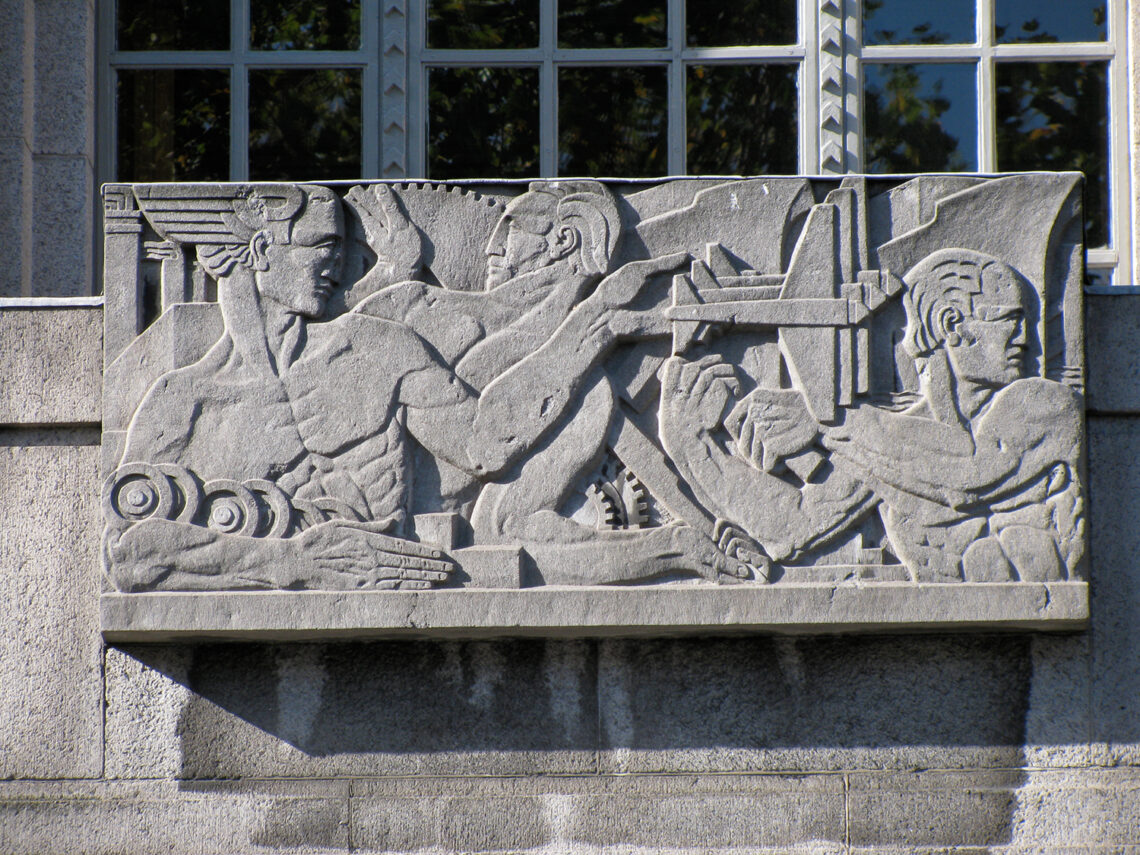 Hayes was a multidisciplinary artist. Not only did she have a significant reputation as a sculptor, she was also a painter, book illustrator, graphic artist and designer. In an oeuvre that was driven by drawing, Gabriel Hayes’s sculptures are an extension of this two-dimensional practice. Emphatically linear, frontal and mostly relief works, sculptures that appear to be fully three-dimensional are frequently displayed in an architectural setting that prevents a rear view. When in teacher training in the NCA (later NCAD) in 1936, Hayes wrote a paper advocating the teaching of drawing to children in primary schools, favouring ‘memory drawing’ over ‘object drawing’ (Hayes Archive, private collection).

Born in Dublin, Hayes was educated by the Dominican nuns in Eccles Street, where her interest in art became evident. In 1925/26 she had one year of study at the NCA before leaving for Montpellier where she was to remain for three years. While in France to learn the language, she attended drawing lessons and studied works of art in the provincial galleries and in Paris. Towards the end of her sojourn, one of the great masters of French sculpture, Antoine Bourdelle (1861–1929), died. Hayes paid homage to him later in her career when she modelled her Madonna and Child (limestone, 1950) [137] for the Servite Priory in Benburb, Co. Tyrone, on Bourdelle’s colossal Madonna of Alsace, erected in Niederbruck, Alsace in 1922.

Back in Ireland in her early twenties, Hayes pursued more serious studies at the NCA, where she was a regular prizewinner. At this stage, a pupil of Seán Keating, she thought of herself as a painter. Keating’s influence remained evident in much of her painting. In the early 1930s Hayes was represented at the RHA largely by painted works and was to discover her talent for sculpture rather by accident. Submitting work for the Taylor Scholarship in 1934, she chose unexpectedly to compete in the sculpture rather than the painting section. Her image of the Prodigal Son, which the jury deemed ‘a fine attempt at design’, won her the award of £50 (IT, 14 July 1934). In the same year, with little experience of sculpture, Hayes was commissioned to carve a set of Stations of the Cross (plaster) for Our Lady’s Hospice at Harold’s Cross in Dublin (now in the Church of St Jude the Apostle, Templeogue). These low relief panels, bold, clear and hard-edged, already reveal her distinctly unfussy style; the focus is on narrative detail rather than broad statement. Heads are carved in profile rather than full face – a stylistic device that Hayes was to redeploy to considerable effect in her carved limestone panels for the new Department of Industry and Commerce building, Kildare Street, Dublin, in 1942.

In 1936, married to Seán Ó Ríordáin, an archaeologist in UCC, Hayes moved to live in Cork. Devoting herself initially to raising a family, assisting her husband with his excavations and painting portraits, she resumed her career in sculpture in the early 1940s with commissions for work on two buildings in Dublin. In 1941 she was commissioned to collaborate with Cork architect J.R. Boyd Barrett on the Kildare Street building. Although not among the original group of sculptors invited to submit designs, which included Laurence Campbell, Séamus Murphy, Albert Power and Oliver Sheppard (qqv), Hayes was subsequently approached and her designs and estimated cost of £930 met with approval. This is the work for which Gabriel Hayes is now best known. Relief panels representing industrial developments in Ireland and keystone heads of Éire and St Brendan adorn the building. As a result of being a late addition to the architectural design, the carved panels are too small for the building and are somewhat overpowered by it.

The novelty of a woman obtaining such a commission and the sight of her in hanging scaffolding on the façade of the building carving her work in situ [see 24] delighted the media. Hayes’s vigorously carved industrial workers, depicted in profile, represent a range of activities, from aviation and ship-building to pottery and shoe-making. In her earlier relief work, she demonstrated an Art Deco flair, while these later works are socialist-realist in style, which was prevalent in Russian and German sculpture but entirely unexpected in Ireland. Industrial relief imagery of a similar nature by her Irish contemporaries, such as Campbell and Murphy, does not promote physical strength in the manner of Hayes’s work, nor are their interpretations of the male figure as insistently muscular. This is particularly evident in the Aviation panel [139] which is positioned over the entrance porch and for which the drawing remains extant. Hayes was not concerned with naturalism or characteristic Irishness in figures that were to be viewed at such a distance, but sought instead ‘the simplest of shapes and lines’ (artist’s note, 15, Ms OPW A 15 1/52/41). It is regrettable that contemporary critical comment on such significant, and indeed novel, Irish sculptures was scant. Concentration on Hayes’s domestic life and consideration of ‘how graceful and thin a hand could wield a five pound mallet’ distracted from a serious discussion of her work (I Ind, 22 April 1942).

The contract for a second architectural work was agreed in 1943, when Hayes was offered the commission to carve figures for Robinson & Keefe’s recently completed College of Domestic Science (now DIT) on Cathal Brugha Street, Dublin. Nicely positioned on a curved corner of the building, the so-called Three Graces are youthful representations of Sweeping, Spinning and Sewing. Hayes used three of her friends as models for the allegorical figures. These limestone carvings show little advance on late nineteenth-century sculptures of workers.

If Hayes’s legacy appears to rely on her architectural sculptures in Kildare Street, this is to ignore the extent of her work throughout the country, much of which is religious. Leaving Cork in 1942, when her husband was appointed Professor of Archaeology in UCD, the family moved to Celbridge, Co. Kildare, where Gabriel Hayes remained until her death. She set up a studio in the old coach house of the family home, and here she modelled Madonnas, with and without the Child, for churches and institutions across Ireland. Both under and over life-size, many of these figures are similar in design and several are cast in bronze. Such was the relative novelty of casting in Ireland at the time that Hayes’s Madonna and Child for the Church of the Holy Cross at Glanworth, Co. Cork, was the subject of an extensive photographic article (Times Pictorial, 11 November 1944), explaining the process carried out in McGloughlin’s foundry in Pearse Street.

Further examples of Madonnas by Hayes are a bronze statue above the entrance to Robinson & Keefe’s remodelled Franciscan Friary on Merchants Quay, Dublin, in 1955, and plaster variants in Our Lady’s Hospital for Sick Children (1956) and in St Brendan’s College, Killarney (1959). A statue of Irish Franciscan theologian and scholar Luke Wadding (1588–1657), erected on the quay (now relocated to the French Church) in Waterford in 1957 and the Ascension panel for Boyd Barrett’s Church of the Ascension in Cork are also the work of Hayes.

In 1957, the year her husband died, Hayes received her most substantial commission from the Catholic Church – to carve the Stations of the Cross for the newly built cathedral in Galway. This was a challenging but financially welcome commission because Hayes now had two dependent teenage children. Unlike her earlier Stations, these are full figure compositions, but the high relief element is retained, because, placed high against the walls of the building, the groups are not carved in the round. Hayes chose not to design the Stations in any particular order, in an endeavour to maintain her creative energy, but inevitably there is some unevenness in this work. The initial groups were carved in Portland stone, but, because of the demanding nature of the work, the remaining Stations were cast in reconstituted stone at Creedon’s in Rathmines, which worked from her original models. Hayes was in the habit of employing family members, neighbours and friends to act as models for different figures, and in this instance the faces of Christ and the Madonna were modelled from Italian friends living in Dublin. These over-life size groups were to occupy Hayes for more than a decade and, when completed, she was to admit that ‘sculpting is tough work for a woman’ (unidentified press cutting, 1977, Hayes Archive).

Up until this time Hayes appeared to have abundant energy and, described variously as ‘humorous’ (E Herald, 8 February 1968) and ‘cheerful’ (Patrick Campbell, From Silent Glens to Noisy Streets, 1983, p. 50), she had regular patronage throughout her life. She participated in the exhibition circuit, showing at the RHA until 1947 and subsequently with the ISI (qv) and at the annual Oireachtas exhibition. In 1964 Hayes showed a statue of St Patrick in the Irish Pavilion at the New York Fair and she was later to design a St Patrick’s Day medal (1972, silver). As a result of her expertise in relief sculpture, she was widely commissioned to model trophies, wall plaques, commemorative medals and coinage (see ‘Coins and Coinage’). Many of these designs drew on her knowledge of early Celtic Art, particularly those for the new Irish decimal coinage in 1971.

Hayes was not the only prominent female working in sculpture in Ireland in this period, but she was alone among them in employing the ‘austere’ (I Ind, 22 April 1942), hard-edged style that was noticeable in the work of several of her male peers, particularly Séamus Murphy and Laurence Campbell. Her work more than resembles that of her English contemporary Eric Gill (1882–1940), who was also a multidisciplinary artist and whose sculptural output was similarly dominated by high relief religious imagery in a simplified linear style. However, the work of Eastern European sculptors also found favour with Hayes, notably that of Ivan Meštrović (1883–1962), whom she is known to have admired and a catalogue of whose work was in her library.

Although claiming to have retired or at least to have retreated into painting after the Galway Stations, Gabriel Hayes continued to sculpt. In 1977, she won the Oireachtas exhibition award for sculpture with a carved head of Grainne Mhaol (walnut, private collection). The following year she was working on a small number of woodcarvings, which were left unfinished when she died on 28 October.