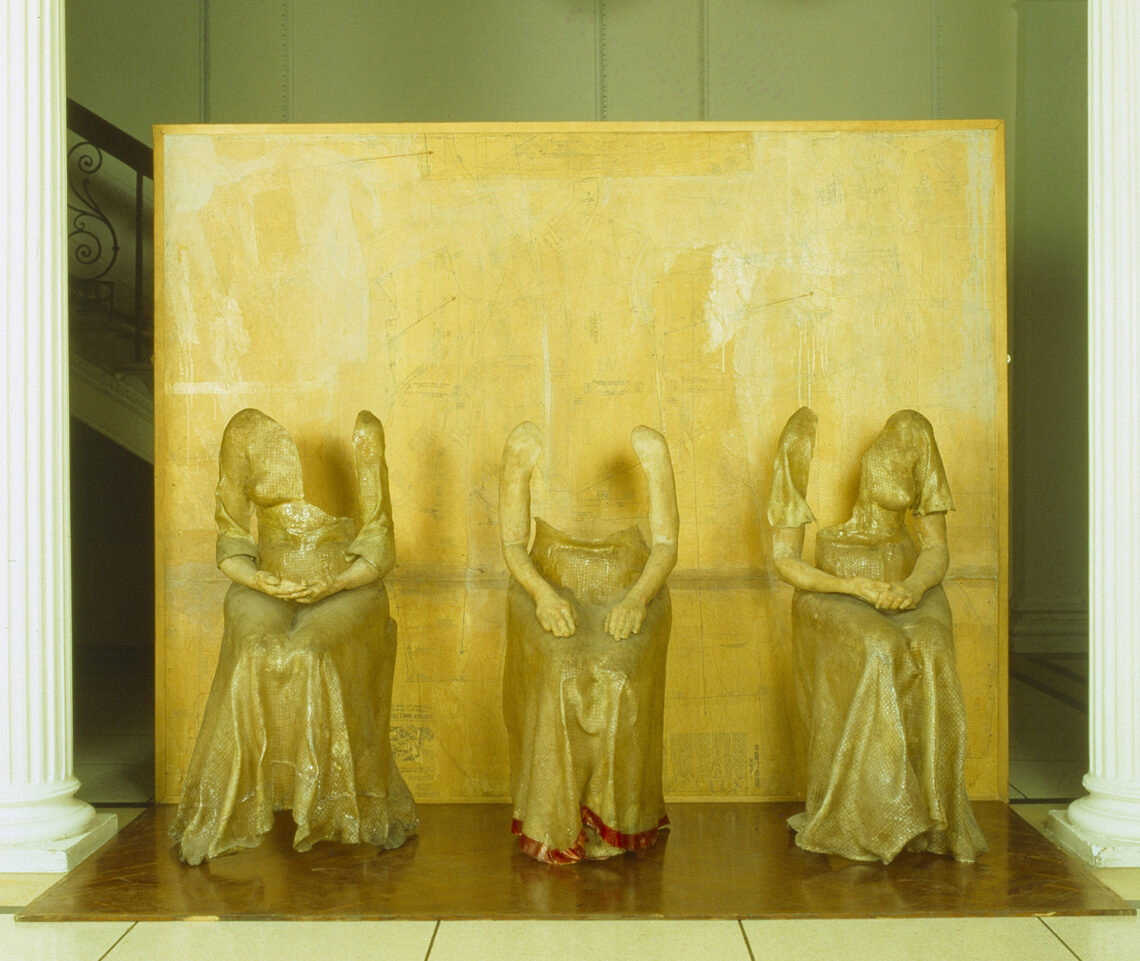 Born in Dublin, Kathy Prendergast lives and works in London. She studied at NCAD and briefly trained as a camera operator in RTÉ before enrolling at RCA, London, where she graduated with an MA in sculpture in 1986.

Prendergast’s work is characterized by persistent themes of identity, geography, memory, love, loss and loneliness. Like her contemporaries Dorothy Cross and Alice Maher (qqv), with whom she is often associated, Prendergast has been primarily considered as a sculptor, although her practice includes both two- and three-dimensional work, and drawing has played a central role in her oeuvre. She has used diverse materials, from graphite and watercolour to wool, fabric, human hair, chalk, fibreglass and painted bronze. Prendergast gained recognition very early in her career when Waiting (1980, HL) [264], a sculptural installation from her diploma exhibition at NCAD, won the Carroll’s Award at IELA and was subsequently acquired for the Dublin municipal collection at HL. Waiting features three headless female figures wearing simple nineteenth-century dresses. They resemble the remnants of antique sculpture, but also convey a sense of patience, self-sacrifice and resignation. Dressmaking patterns are traced onto the wall behind the figures and a parquet floor beneath their feet completes the installation creating a space that belongs to the past. The mystery inherent in the sculpture and the evident concern with the position of women in society, have become recurrent themes in Prendergast’s work.

Sea Bed, another early installation, is a life-size sculpture of a naked female lying on a Spartan bed. Lines, contours and measurements, reminiscent of both sewing patterns and maps, are marked on the woman’s body. The sense of mystery and concealment conveyed by the fragmentary figures in Waiting is also present in Sea Bed, though the latter has a more contemporary feel.

The Body Map series (1983, IMMA), first exhibited in Prendergast’s degree exhibition at NCAD, has gained an iconic place in Irish art history. Pale, delicate images in pencil and watercolour depicting parts of the female body delineated with contour lines and cartographic markings, the Body Maps represent woman as a terrain to be tamed and colonized. While works such as SouthWest Region resemble contour maps, others, including To Alter a Landscape, are cross-sections displaying geological strata and underground rivers. Despite the references to control and colonialism, Prendergast has argued that the Body Maps articulate ‘a personal geography’ rather than a feminist agenda. She has written ‘For me the map drawings of the female body are records of the exact details of a particular body. The work is not directly about female sexuality but about a personal geography’ (Hanrahan, p. 6).

Geography, personal or otherwise, is a recurring theme in Prendergast’s work. In Stack (1989–91, IMMA) [11], she created one of her largest sculptures to date, by piling up layers of painted fabric to create a mound measuring 274 × 264 × 71 cm. The resulting form resembles an outcrop of rock with prominent strata, or a traditional turf stack in the shape of a flat-topped pyramid. Prendergast’s use of fabric to create a work of this scale, rather than more traditional sculptural materials, can be interpreted as a reference to woman’s work, in the textile industry and also in domestic sewing and mending.

In the City Drawings series (begun 1992, IMMA), Prendergast continued her concern with scale and mapping. Exhibited collectively as an installation, and hung in a line at eye level, each graphite drawing is a map of a capital city with all the text and many of the defining features removed. The resulting images are spidery diagrams of roads and rivers which are both disorientating and intriguing. Although it is sometimes possible to ascertain the cities that the maps depict, Prendergast has altered the scale so that all the maps fit a 24 × 32 cm sketchbook page. Thus, the maps of familiar cities such as London or Paris, where centuries of planning and growth have created distinctive patterns, are given the same status as the capital cities of developing countries and small island nations. Removing the street names and major features of these capitals also suggests a withdrawal of their status and power.

All cities carry traces of their history in their fabric and in the names of streets, parks and buildings. If that history includes periods of colonialism or colonization, signifiers of those regimes will often remain. By removing the labels, Prendergast renders anonymous streets named after monarchs, generals and conquerors. While this decision could be seen as an aspect of post-colonialism, the names of honoured rebels and freedom fighters are also erased. These images are intended to disorientate both geographically and psychologically, but they can also be seen as democratic in that they make us look at the cities as networks of streets, buildings and geographical features rather than at seats of power.

Parts of this series, which will eventually number 180 drawings, were exhibited at the Venice Biennale in 1995, where Prendergast won the Premio 2000 Award; at Tate Britain in 1997; and at IMMA in 1999, where they were included in Prendergast’s first museum solo exhibition The End and the Beginning.

Prendergast usually works in series, the making of which can span several years, and often moves back and forth between bodies of work. Contemporaneous with the City Drawings are a number of surreal sculptures incorporating, or based upon, domestic objects. Some of these works contain elements that the artist hand-knitted. In an untitled piece from 1994, a mechanical heart beats within a tiny jumper, such as those lovingly knitted by expectant mothers and devoted grandmothers. The work is both surreal and haunting: the small pulse is like a ghostly trace of the child for whom the garment was intended.

Knitting also features in Prayer Gloves (1998) and Secret Kiss (1999). In both works Prendergast has joined two components that are usually separate. In Prayer Gloves the palms of a pair of grey gloves are knitted together. An accompanying photograph illustrates how the gloves force the wearer to adopt a perpetual gesture of prayer or perhaps plead for mercy. In Secret Kiss two balaclavas are joined in an everlasting kiss. This work has echoes of René Magritte’s painting The Lovers (1928), and is also reminiscent of the fate of Francesca and Paolo, the doomed lovers in Dante’s Inferno, who are condemned to be intertwined for ever. However, while both these antecedents presume a kiss between a man and a woman, in Prendergast’s work the secret kiss leaves the gender of the participants unknown.

In a number of works created during the late 1990s, Prendergast used human hair as a medium. In The End and the Beginning I (1997), wispy, aged hair ‘grows’ through a cotton baby bonnet. The effect is disturbing but also evokes the inevitable circle of life and historic images of institutionalized old women wearing bonnets. In a related work, The End and the Beginning II (1997, ACI) [265], Prendergast wrapped hair from the heads of her grandmother, her mother and her child around a wooden cotton reel. Incorporating genetic material from three generations of her family, this totem-like object relates to Prendergast’s position as a mother, daughter and grand-daughter. It also quietly insists on her role as artist observing her place in the lineage, but also manipulating the material to convey her message.

Love Object (1999) and Love Table (1999) extend this theme by making use of large swathes of human hair rather than individual strands. In Love Object long tresses of dark hair extend from the head of a plastic brush towards a matching comb. In Love Table a mane of dark hair hangs from below a small desk.

Hair has also been stitched into the upholstery of an accompanying chair. Both works have a surreal quality and bring to mind hair-related myths including the German fairy tale Rapunzel. While many artists have utilized human hair in their work, particularly in relation to feminist themes, Prendergast has used it to create several different types of sculptures, some surreal, others poignant and personal.

In Lost (1999, Tate Gallery), Prendergast revisited her engagement with maps. This work is a computer-generated map of North America where all the names have been erased, bar those which include the word ‘lost’. The geographical map, intended to inform and clarify, is made strange and disorientating. The result is an emotional map; a strangely moving work, that highlights centuries of loss and disappointment. Lost was conceived as part of an Emotional Atlas of the World which includes all the places in the world that have names associated with emotions.

In the twenty-first century Prendergast has embarked upon another map-related body of work, the Black Map Series. In works including Black Map Series: America North Central (2009, Tate Gallery), Prendergast has drawn over a map in black ink, leaving small dots uncovered that represent areas of habitation. The resulting images resemble star maps with the ghostly presence of the geographical features just visible in the background. Although the white dots appear to represent population density, they are misleading because large cities and small villages are all denoted by a single dot. At the same time, there are large areas of blackness where wilderness or vast farms dominate the landscape.

In parallel to Black Maps, Prendergast created a series of hand-painted bronze sculptures, based on everyday objects. These works were inspired by the half-light and mystery of the hours between 4 am and 7am. In The Grey before Dawn (2009), a small table covered with a cloth has been cast in bronze and painted to resemble the Black Maps. The result is a star-spangled object that appears to transcend the weight of its materials. Further works in bronze, including The Guardians (2010) and The Dark Embrace (2010), have a more sinister edge. Here the paint has been replaced by a dark greyish patina which makes the amorphous shapes look like foreboding shadows in the twilight.

Prendergast has exhibited at venues throughout the world including the Sydney Biennale; Institute of Contemporary Art, Boston; the Drawing Center, New York; Kerlin Gallery, Dublin; and Peer, London. She is represented in the collections of the Tate Gallery; the British Government; the Cheekwood Museum of Art, Nashville; University Art Museum, Santa Barbara; the Albright-Knox Museum, Buffalo; the Contemporary Museum, Honolulu; at IMMA and HL; and numerous private collections in Ireland, Britain, Europe and the USA.