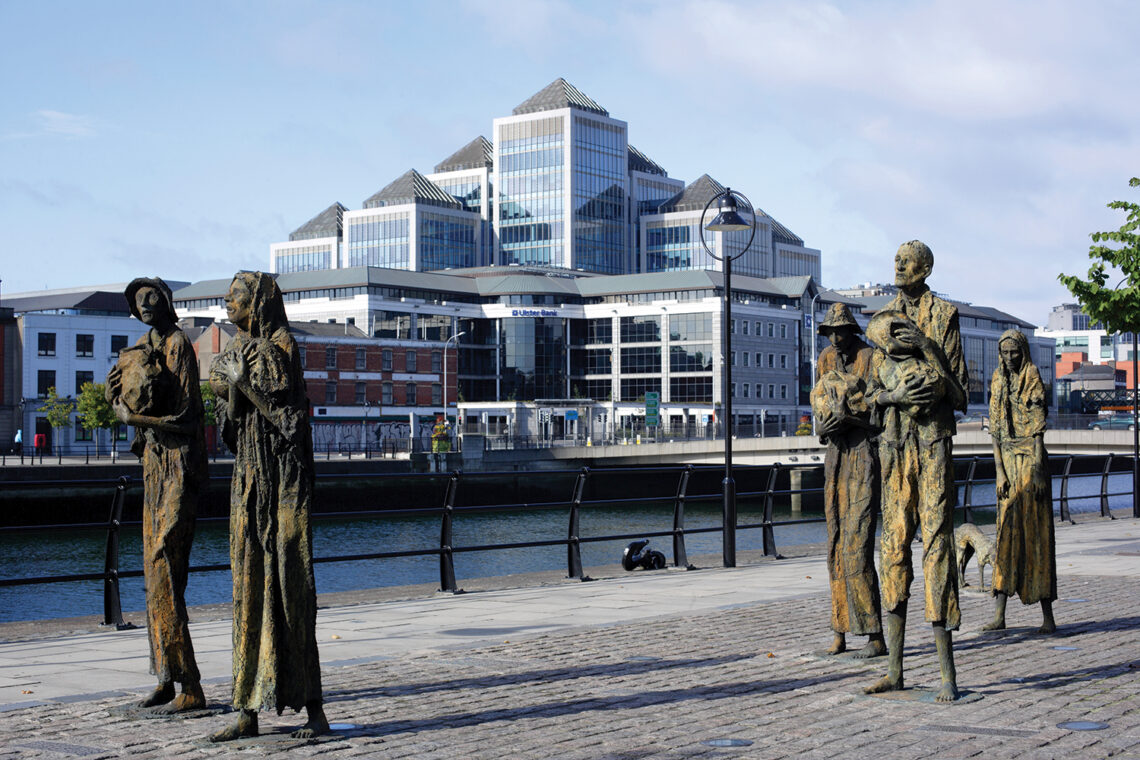 Gillespie is one of Ireland’s best-known and most prolific public sculptors. His figurative sculptures primarily in bronze, demonstrate an affinity with narrative, allegorical and/or historico-literary subjects, and include corporate and civic commissions in Ireland, the United States, Britain, Holland, Liechtenstein and Canada.

Born in Dublin to Irish Quaker parents, Gillespie and his family moved shortly afterwards to Cyprus, where his father worked as a doctor for the British expatriate community. According to Gillespie, it was in Cyprus that he first encountered the lost-wax process of bronze casting and the processes of copper mining and working so central to Cyprus’s history and industry (Kohn, 9). However the outbreak of civil war in Cyprus forced the family’s relocation in 1962, and Gillespie’s transfer to boarding school in England. His artistic training began at the York School of Art in 1969, where he learned the fundamentals of modelling and casting, and met his future wife, the Norwegian Hanne Thome (also a trained artist and hand-weaver). Gillespie continued his education at the Kingston College of Art in Greater London from 1970 to 1972, pursuing the second year of his studies in Oslo at Kunst og Håndverkskole. He returned briefly to Kingston to complete his final year in 1973, before moving to Norway to marry Thome in 1974.

From 1972 to 1977 Gillespie mounted four successful one-man exhibitions, in addition to lecturing at the Vigeland Museum and the Edvard Munch Museum. At the latter, Munch’s intensely symbolic and Expressionist aesthetic exerted considerable influence on Gillespie’s own developing practice. In 1977 Gillespie and his young family moved back to Ireland, establishing their home, studio and foundry at Clonlea in Blackrock, Co. Dublin.

Gillespie’s sculptural practice since the 1970s consists of an unusually self-reliant process, working alone from the design stage through to the final casting of the work. His specially built one-man foundry at Clonlea has granted the artist independence and freedom to experiment with casting techniques, developing a unique alloy utilized in his lost-wax bronze pieces. The complex and physically arduous process of self-casting remains central to his artistic practice, documented in 2006 by Moondance Productions in the film Sculpting Life, screened on RTÉ television. Although work in bronze remains his primary medium, Gillespie has occasionally created pieces in stone and wood, often heavily influenced (as in Reclining Triptych, 1994) by the work of Henry Moore, whom he met during his studies at Kingston College of Art.

Key early commissions included a series of annual sculptural awards for the GAA in 1979, which led to further award commissions from government and corporate clients. Between 1977 and 1986 a series of solo exhibitions in Dublin, York, London, Belfast, New York, Cannes, Los Angeles and Stockholm ran concurrently with his commissioned work, with representation from the Solomon Gallery in Dublin, Galerie Majke Hüsstege in Holland and the Jonathan Poole Gallery in London.

Although Gillespie’s gallery work of this period often sold well and received positive notices, not all critics felt his choice of subject and form matched his technical proficiency. Reviewing a 1987 show at the Solomon Gallery, Desmond MacAvock averred, ‘His technique in these castings is formidable but one questions whether this always marries well with the slightness of some of the incident, while the implied comment in others can become trite… [his works have] a wide illustrative reference, even fantasy, but this can teeter off into a kind of frozen doodle’ (IT, 1 May 1987).

Nevertheless Gillespie’s public appeal soon translated into his first major public commission from Dun Laoghaire Corporation, the Blackrock Dolmen (1987), a fibreglass megalithic stone held aloft by three bronze figures – two female and one male – located at a traffic junction a few blocks away from Gillespie’s residence and studio in Blackrock. A figurative sculptor in the main, Gillespie has since been most successful within the realm of public sculpture, prompting him to withdraw in 1997 from exhibition work to concentrate on public and site-specific commissions. His popularity with corporate clients is evidenced by works such as The Cycle of Life (1991, Steamboat Springs, Colorado); Aspiration (1995, The Treasury Building, Dublin); and Birdy (1997, Crescent Hall, Mount Street Crescent, Dublin); likewise he has produced numerous commemorative sculptures for both public and private patrons, including W.B. Yeats (1990, Sligo); Ripples of Ulysses (2000, Merrion Hotel, Dublin); and Gerard Manley Hopkins (2004, Regis University, Colorado).

Gillespie’s best-known and most important work is his Famine group (Custom House Quay, Dublin, 1997) [127], which was installed at the time of the Famine’s 150th anniversary as a gift to the Irish State from Norma Smurfit. The seven gaunt, slightly larger than life-size bronze figures have found popular appeal as a monument to the Famine. The work began life as a private commission; despite the effectiveness of their final location along Dublin’s quays, the figures were designed without a site in mind, and the rapid urban development of the Docklands area has further ensured their high visibility. Gillespie drew upon several sources in creating the figures, including photographs of Holocaust victims and the personal tragedy of his sister’s early death at age twenty-four, following years of struggle with drug addiction and anorexia. Roughly modelled in bronze, the unpatinated, ragged surface and distended proportions accentuate the bleakness of the spectral figures and their haunted expression. Though some, including the critic Aidan Dunne, have criticized the work as excessively sentimental (Sheehy, 2005), its sympathetic handling of the difficult subject has received considerable acclaim: in 2007 a similar companion piece (Migrants) was installed at Ireland Park, Toronto, representing the arrival of Gillespie’s group in the new world.

At its best, Gillespie’s work marries a dextrous treatment of the bronze surface with an evocative choice of subject and sensitivity to context, as with Christ (2003, Kylemore Abbey, Connemara) and Proclamation (2007, Kilmainham, Dublin). However, other examples veer too far towards the reductively literal (as with Ambition, 1999, Gimbrere en Dhomen, Rotterdam) or an awkward realism (as with Cashel Dancers, 1990, Brú Ború Cultural Centre, Cashel and The Minstrels, 1993, Cheesman Park, Denver).

Critical reception of Gillespie’s work continues to vacillate widely, as a sample of reviews of his 1994 exhibition at the Solomon Gallery aptly demonstrates: Ciara Ferguson refers to his figures’ ‘dreamy pensiveness’ (Sun Ind, 20 November 1994), whilst Medbh Ruane suggests that despite Gillespie’s ‘understanding of art as a spiritual force, as something beautiful and uplifting’, ‘real insight needs a certain muscularity which isn’t always present in Gillespie’s skilful and well-made work’ (ST, 27 November 1994); and Luke Clancy decries the show as ‘listless and thoroughly unambitious…. Even the most straightforward of pieces… have a crushingly hackneyed appearance’ (IT, 21 December 1994).

Irrespective of critical consensus, Gillespie’s commercial success and energetic output have assured him wide public renown and recognition, and his distinctive elongated and stylized figurative sculptures will likely continue as prominent civic fixtures for many years to come.