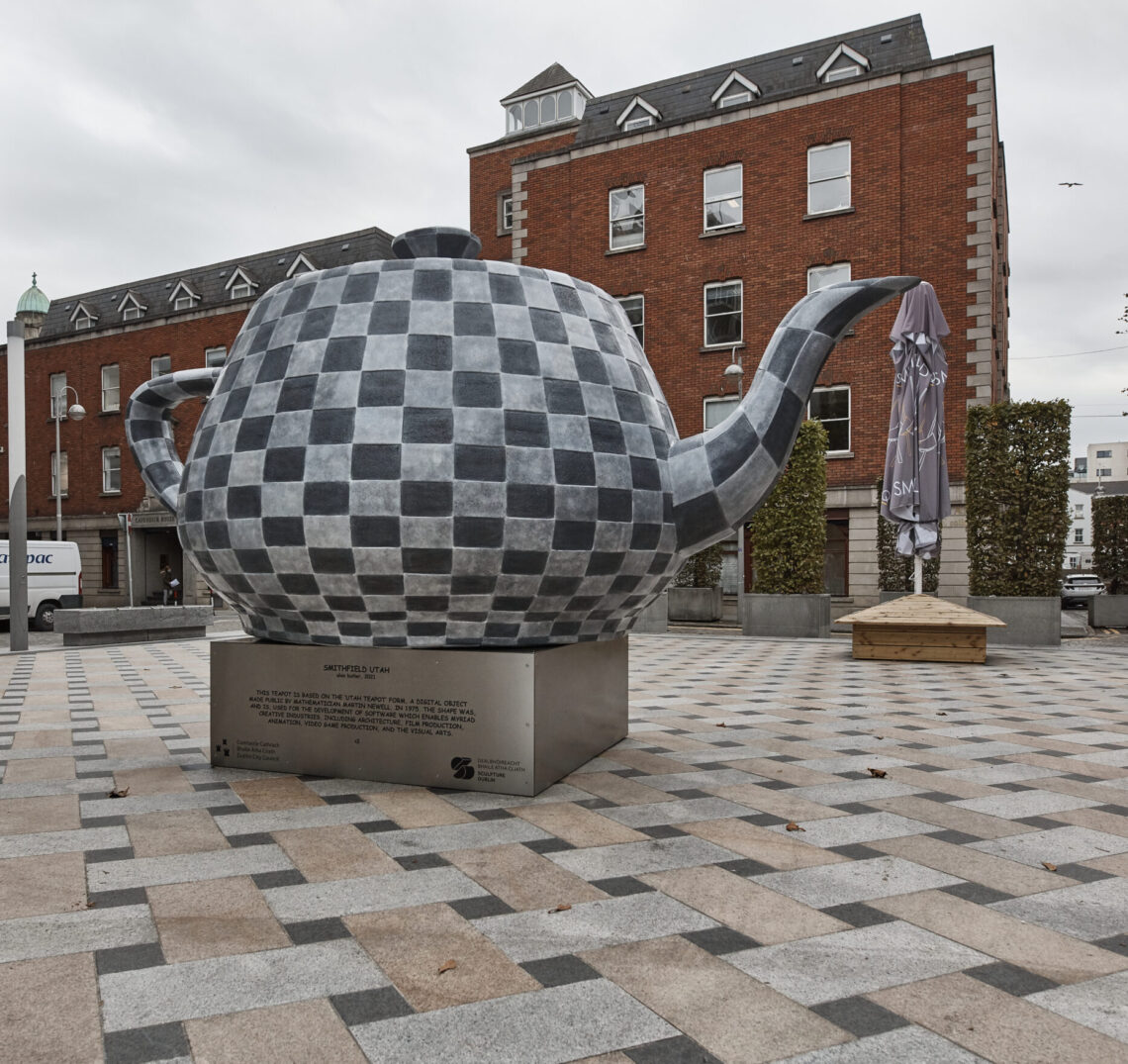 Sculpture Dublin is delighted to announce a new sculpture for Smithfield Square Lower!

This public landmark situates an oversized teapot at Smithfield Square Lower. As an absolutely ubiquitous form, ‘Smithfield Utah’ provides Dublin with a new artwork that is instantly legible by anyone of any age group or nationality. Its scale and materials, while sensitive to Dublin’s surrounding architecture, will connect contemporary digital practices with traditional production modalities.

As you can see, it’s a teapot, and there is an obvious connection to Irish culture across generations, which does not need to be explained. The work is intended to be enjoyed as a joyful meeting place for friends, or colleagues availing of the local food and beverage establishments, or punters enjoying any of the cultural businesses in Smithfield. For passers-by, on foot or Luas, the teapot will be a temporal journey marker. The simplicity of this form makes it easy to be enjoyed by Dublin’s citizens.

But it’s not just any teapot. This is a ‘Utah Teapot’.

The ‘Utah Teapot’ is actually an iconic virtual teapot form, first proposed and made publicly available by mathematician Martin Newell, in 1975.

His Utah Teapot was a page of computer code describing this most common three dimensional form numerically. It is used to test algorithms that visualise 3D computer graphics. The code creates the object virtually, and can be ‘skinned’ with a digital material to produce its image on a screen.

As such, the form represents a milestone in the technological development for the tools that are used today by the dozens of Dublin’s architectural firms that are in walking distance to the square in Smithfield. The celebration of this form might even ask: “where would the entire Smithfield development be today without the Utah Teapot?”

The form is also is hugely significant to the development of 3D computer animation software, which is existentially connected to much of Smithfield’s rich creative sector, such as Brownbag Films, the Light House Cinema, graphic designers, and the scores of contemporary artists in the area.

As an artist, I use the tools made possible by the idea of the Utah Teapot every day. I use them to create the work through which I make a living. In fact, this teapot form is a sample object that is packaged with most of the 3D graphics apps I use on a daily basis. In this way, it is sort of an unsung hero of many contemporary cultural practices. So much so, that it has been snuck into many video games over the last few decades, and has made appearances in The Simpsons and multiple Pixar movies, like Toy Story. The Utah Teapot is a form that has already been seen by billions of people around the world.

‘Smithfield Utah’ uses its form in the spirit of its originator. It is not only an ideal in its form, but an ideal in the concept of possibility itself.

Newell made his teapot model public, so that this breakthrough would lead to the development of further research. While just a single page of numbers that describes a teapot, it was grass seed from which a prairie grew. Beyond architecture and culture, apps that grew from this artefact enabled vehicle design, medical equipment, computer engineering, product design and just about any industry that makes the physical world happen today.

As such, ‘Smithfield Utah’ will perform as a symbol for the things that make Dublin great. What came to my mind in responding to this call, was Dublin’s deeply rooted and valued cultural activity, a fundamental respect for knowledge sharing and education, the importance of social co-operation, and an outlook that understands its role in, and connectivity to global culture.

The teapot, a general symbol of warmth and connection, affords Dublin a joyful sculpture at a human scale that references the rich history of congregation at the Smithfield marketplace, while thinking forward to the new forms of global connectivity, creativity and sharing economies that lie ahead of us. The final form transposes this digital object and through collaboration with a bronze foundry, has made the virtual ‘Real’. As such, it utilises one of the oldest traditional production modalities we have to produce a physical digital object.

‘Smithfield Utah’ will perform on scales that reflect the locality in which it is placed. To a student studying design at the TUD, it’s a stepping stone to their future. To an architect, it is one of the foundation stones in contemporary practice. To a mathematician, it’s an algorithm. To a tourist, it’s the reception they receive at their hotel. To friends, it’s the ceremony of being together. To workers, it’s the long deserved break. To families, it’s a welcome home.

But most importantly, to everyone, it’s just a teapot!